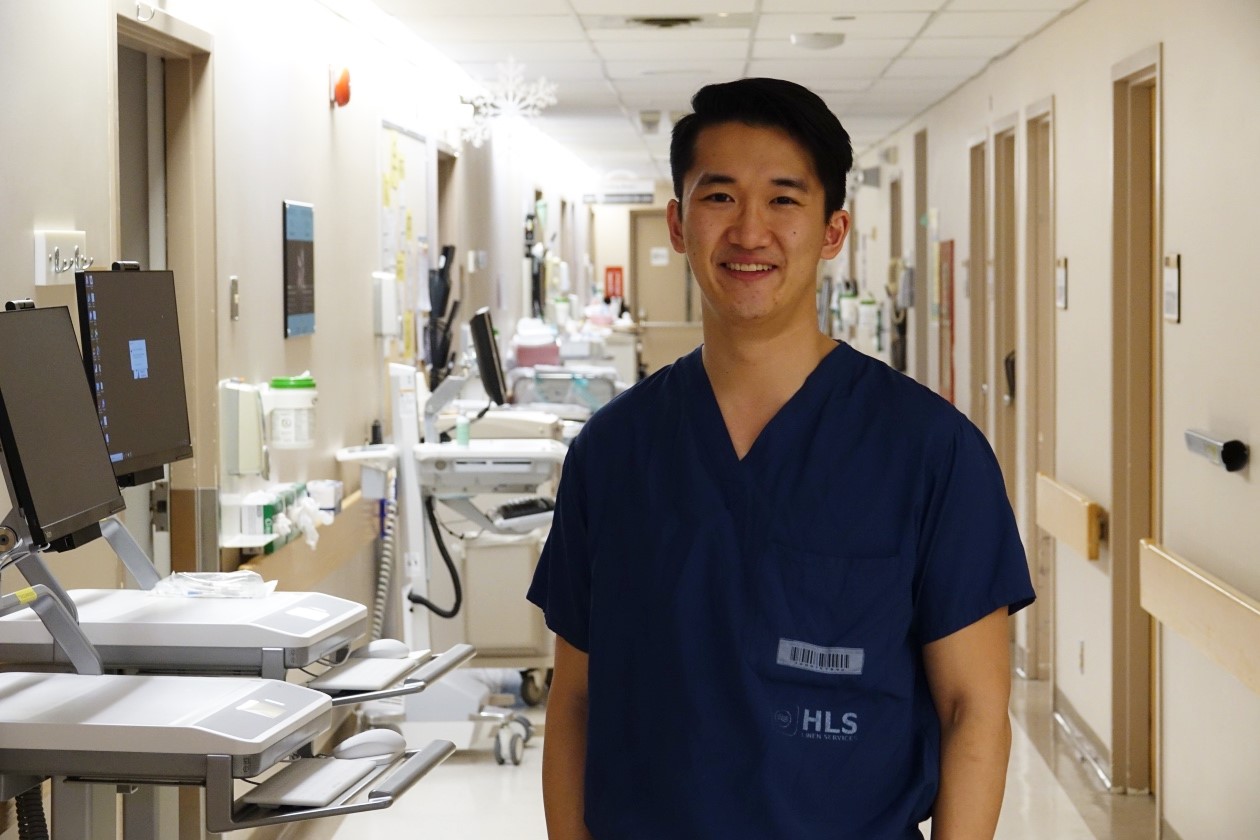 “Resilience looks different for everybody. It’s whatever you need to do personally – the skills, habits and practices – to get you back to normal.”

In his third year of medical school, while on a clinical rotation at Sunnybrook Hospital, Ben Fung lost a patient. It wasn’t the first time. He had had other patients die suddenly, or from trauma. But for Fung, this was more personal. He had spent weeks caring for the man, developing a relationship with him and his family.

“When he passed away, it was devastating,” Fung now recalls.

Fortunately, he had supportive colleagues at the hospital. They reviewed the outcome with him and shared their own experiences with losing patients. Away from work, Fung talked to his partner and sought comfort at a place he often visited during tough times — the 24-hour Korean restaurant in his neighbourhood.

“Instead of feeling lost and not sure what to do or how to recover after something bad happens, I’ve been to the restaurant enough times to know that after I leave I will feel good, and that’s reassuring,” he explains.

“Resilience looks different for everybody. It’s whatever you need to do personally — the skills, habits and practices — to get you back to normal.”

It was this type of insight Fung brought forward in helping create a new resilience curriculum at the University of Toronto’s MD program. At that time, the Office of Health Professions Student Affairs (OHPSA) had been pushing to integrate student wellness into the medical school curriculum, so when U of T agreed to include resilience workshops and online modules in the first and second years of the curriculum, OHPSA got to work drafting a framework and seeking student feedback.

Fung stepped forward, one of many student representatives helping to shape the curriculum content.

“I thought it was unfair and unfortunate that as medical learners we are so focused on the well-being of others that we don’t take care of ourselves,” he says.

So why don’t medical students take care of themselves? To answer this question, the curriculum committee started by surveying students.

“We went to them and asked specifically, ‘What gets in the way of your resilience during medical school?’” says Shayna Kulman-Lipsey, Manager of Counselling Services at OHPSA and staff lead on the resilience curriculum.

The stigma of asking for help, imposter syndrome and shame and guilt were common themes raised by first-year students.

Once these barriers were identified, the committee worked on the skills and strategies students would need to overcome them: reaching out for help, cognitive reframing, self-compassion, awareness of upward and downward spirals and mindfulness.

“At U of T, there has been a palpable shift in the kinds of conversations that we are having. Students regularly are able to say to one another and their mentors, ‘I’m feeling burnt out’ or ‘I think I’m on a downward spiral.’”

The committee also searched for unique ways to engage students. Fung proposed a video series, where medical students, residents and staff would share their experiences with mental health.

“The way I’ve learned how to maintain my resilience has always been the stories from my co-workers, my friends, someone else’s experiences,” Fung says.

Facing a lack of resources for the videos, Fung — an amateur videographer — volunteered to record and edit the sessions. Monologues in Medicine was born.

Much to his surprise, Fung had no trouble finding students willing to share their stories.

One student, Noam, explained on camera how he stopped going to class, seeing friends and even eating. He skipped exams and ignored friends’ calls of concern.

“I just powered through,” he explains in the video. “I thought if everyone else is powering through, why shouldn't I?"

Another medical student, named Haley, talks about feeling humiliated after having a panic attack in class.

“It was awful because I was sitting in lecture with 259 of my peers who I’ve known for a couple of months, but not so well that I’m comfortable being a sobbing mess in front of them.”

Fung says the students shared their stories so others would feel less alone. As Angela, another student, says in one video: “Once you make small steps in revealing that you are struggling, it’s really cathartic, and it makes you realize that your classmates are there to support you.”

Monologues in Medicine is now an integral part of the resilience curriculum in both the first and second years of the U of T MD program. Where possible, material is presented in the form of the video testimonials (some 20+) rather than a lecture, online module or reading. A trailer is also shown to all first-year students during Orientation Week.

“Every time we show the trailer for the first time, students see their peers talking about very vulnerable, stigmatized and personal topics — the room is dead silent and they are shocked,” Fung explains.

“Students tell us it’s reassuring to know that U of T has taken a serious stance and steps to address this significant problem.”

Since the launch of the resilience curriculum in 2016, Kulman-Lipsey says OHPSA has seen an increase in personal counselling — and that’s a good thing.

“I would like to think that more students come to us because reaching out is a protective factor for maintaining resilience, so we want them to reach out,” she says.

Fung too has seen a change.

“At U of T, there has been a palpable shift in the kinds of conversations that we are having. Students regularly are able to say to one another and their mentors, ‘I’m feeling burnt out’ or ‘I think I’m on a downward spiral.’”

Now in his fourth year of the MD program, Fung has less time to commit to the resilience curriculum, which has now expanded into the third year of the program. But he is hopeful the dialogue he helped start will create a culture shift at medical schools across Canada.