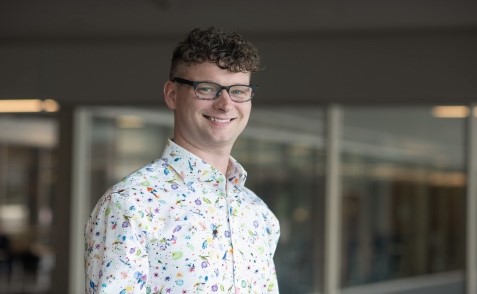 Few residents would be better qualified to write a news story about their own career than Dr. Blair Bigham.

In addition to being an emergency medicine resident at McMaster University in Hamilton and a qualified helicopter paramedic, Dr. Bigham is also a medical journalist. He’s published major feature articles in national publications including The Globe and Mail and The Toronto Star, and he frequently appears on CBC. One of his stories — on gaps in youth mental health services — prompted a $14 million investment in university mental health services from the Ontario government.

“I found there were topics I would come across in my work in the emergency department or as a paramedic that really were anecdotes of deeper societal challenges, and I wanted to be able to tell those stories,” he says.

In 2017, Dr. Bingham completed a Munk School of Global Affairs fellowship to share these stories with a broader audience and says his experiences and training as both a physician and as a reporter have helped inform both roles.

Dr. Bigham has also continued to advocate for his fellow residents on the issue of trainee well-being, with tireless committee work at both the provincial and national levels. After entering medical school, he found many of his classmates were struggling to deal with the type of tragedies he had already experienced in his eight years as a paramedic. Dr. Bingham took this opportunity to play a mentorship role, which has evolved over time.

Dr. Bigham has already developed an impressive dossier of research work with publications in high-impact journals including The New England Journal of Medicine, Canadian Medical Association Journal and Cochrane Database of Systematic Reviews. Dr. Bigham is also resident editor for the Canadian Journal of Emergency Medicine.