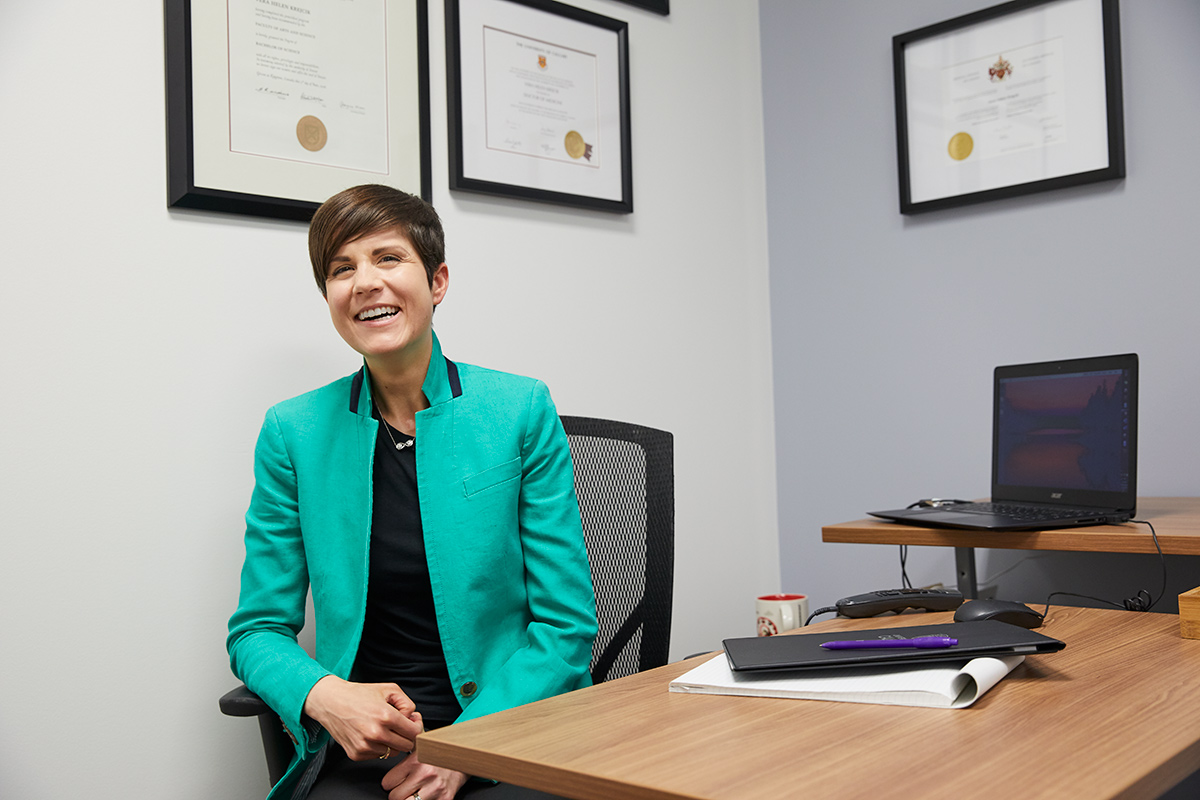 In 2011, Dr. Vera Krejcik faced a major health setback that changed her life and the trajectory of her medical career.

Just before starting her residency in internal medicine, she underwent surgery to repair a vascular malformation in her brain. Though the procedure initially appeared to have gone well, Dr. Krejcik suffered a massive stroke during recovery, which led to a second urgent operation and paralysis on the left side of her body.

After two years of physical therapy, Dr. Krejcik managed to regain much function in her left leg, but her left arm and hand remained nonfunctional, and she walks with a brace to support a paralyzed left foot and ankle.

The physical challenges that Dr. Krejcik was facing forced her to reassess her dream of practising internal medicine. Understanding that the physical demands of a residency in this specialty would be too taxing, she chose to pursue psychiatry and continue her commitment to medicine.

Seeking out physicians with disabilities

As part of her adaptation to this new reality, Dr. Krejcik reached out to other physicians with disabilities and became connected to the Canadian Association of Physicians with Disabilities (CAPD).

In 2012, Dr. Krejcik became CAPD president, a position she held for six years. During her tenure, she helped many physicians navigate their new realities, including Dr. Franco Rizzuti, a medical learner who suffered debilitating injuries following a car crash. He and Dr. Krejcik became friends, and her mentorship was key to his decision to seek accommodation from his medical school.

"The connection to Vera was a lifeline. Over the course of months, she was able to guide me and became a much-needed light at the end of the tunnel.” – Dr. Franco Rizzuti, Pres., CAPD

Dr. Krejcik’s advocacy work extended to the Association of Faculty of Medicines of Canada, where she helped develop first-of-their-kind guidelines for accommodation in residency training programs.

A feeling of kinship with patients

Today, Dr. Krejcik specializes in the care of couples and families with both physical and mental health difficulties to foster disability adjustment.

She believes her personal journey, though difficult, allowed her to make deeper connections with her patients.

"The tremendous work Vera has done accepting the circumstances of her own disability has instilled hope in her patients that there can be profound meaning and purpose in life despite painful experiences and loss," says colleague and psychiatrist Dr. Carl Adrian.

Dr. Vera Krejcik is receiving the Dr. Ashok Muzumdar Memorial Award for Physicians with Disabilities in recognition of her passionate advocacy for patients, medical learners and/or physicians with disabilities.