Note: When this survey was conducted in 2016, the CMA used the term marijuana when referring to this issue. Since this survey, the CMA has updated its terminology to cannabis be more inclusive and align with federal and provincial governments terminology. The word marijuana is used throughout this summary to reflect survey questions posed to respondents.

As the federal government prepared to legalize and regulate marijuana for non-medical use in Canada, we surveyed e-Panel members to ensure the physician perspective would be reflected in our advocacy work. We asked members about their concerns and opinions on marijuana distribution, consumption, regulation and the supports they would need as frontline practitioners.

Want to share your perspective? Visit the CMA Member Voice e-Panel page for more information on  how to participate in future surveys.

CMA must lead on making the risks of marijuana use well known to physicians, public and politicians. We must insist on national surveillance data on the impacts marijuana use is having on our citizens and society. We must NOT relive the tobacco tragedy.

We asked survey participants what regulatory regime the federal government should implement for recreational (non-medical) marijuana use. 43% supported a single system for regulating marijuana for both medical and recreational uses. About the same proportion (39%) supported creating a second regulatory system solely for non-medical use.

The regulatory framework needs to be able to be adjusted based on the research of the impact, so the law can be more generic and the regulations more specific. There should be a lot of funds allocated to education, de-normalization in youth especially, and to research. Clear regulation will help enforcement, and mechanisms to facilitate citizen's participation in the information needed for enforcement will be helpful.

Changes to the regulation of marijuana for medical use

Respondents suggested several changes to the regulation of marijuana for medical use, including:

Marijuana distribution for non-medical use

We asked participants about their preferred distribution models for marijuana intended for recreational use. Respondents felt it should be distributed through:

Personal growth of marijuana plants for non-medical use

About 40% of respondents agreed or strongly agreed that Canadians should be able to grow their own marijuana plants.

Respondents identified several parameters related to this, including:

Locations for consumption of marijuana for non-medical use

We asked participants where people should be allowed to consume marijuana for recreational use. Nearly 80% preferred consumption in private homes. Only 36% agreed with marijuana consumption in designated public places.

Respondents were divided on whether marijuana and tobacco should share the same consumption locations, with 43.0% agreeing and 43.2% disagreeing.

Minimum age for purchasing and possessing marijuana for non-medical use

When asked about the minimum age for purchasing and possessing marijuana for recreational use, 25% of respondents recommended 21 years old. 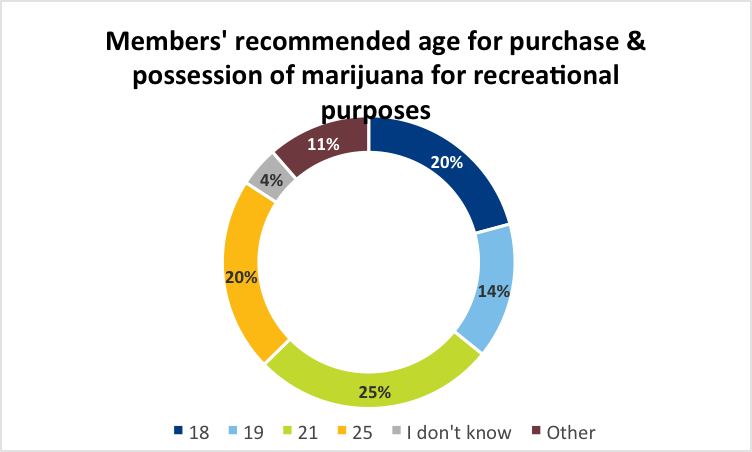 When asked for the thinking behind their answer, respondents most often cited:

Regulation of THC levels in marijuana for non-medical use

72% of respondents agreed or strongly agreed that the federal government should regulate the potency of THC in marijuana for recreational use.

Excluding those not in clinical practice, 60% of respondents always or often ask patients about their recreational marijuana use.

Excluding those not in clinical practice, 47% of respondents felt they had the information they needed to advise patients on the risks associated with recreational marijuana use. Almost 40% of respondents said they lacked this information.

We asked what other tools would support discussions with patients about recreational marijuana use. Respondents said they could benefit from:

18% of respondents said they had authorized marijuana for medical purposes to their patients at least once within the past year.

I think marijuana will find its place in society just like other prescription drugs and alcohol. I think it has potential harms and benefits, and those should be weighed on a case-by-case basis, rather than blanket bans or completely unrestricted use. More research would definitely be helpful in determining its clinical applications.

The findings from this survey directly informed our submission to the government’s Task Force on Marijuana Legalization and Regulation, where we called for a broad public health policy approach for cannabis legalization and regulation in Canada. We’ll continue to represent physicians’ views as Canadian policy on marijuana for non-medical use develops.

See what CMA members had to say about other health topics: