“I can make a difference”: CMA members stepping up to make health care an election issue 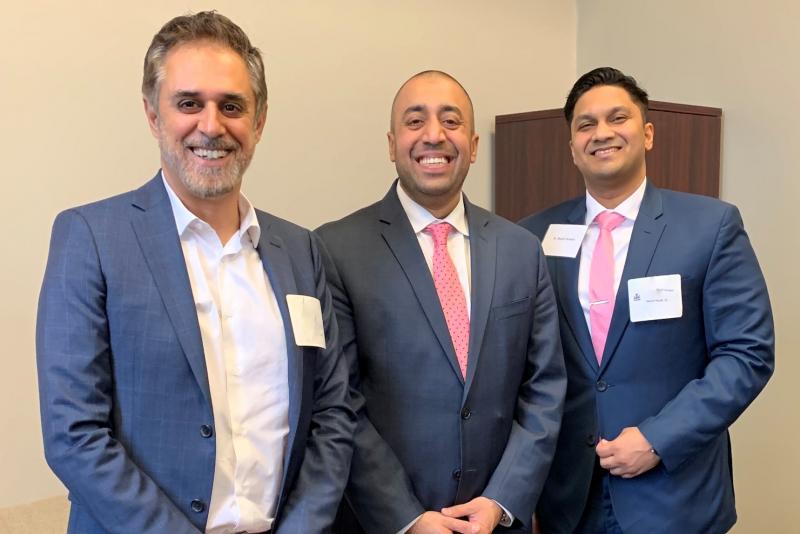 Dr. Sharjil Hussain had his first taste of political advocacy last December, when he took part in a physician advocacy day at Queen’s Park. A young medical graduate, Dr. Hussain spoke to several MPPs about an issue that could impact his future: increased funding for residency spots.

“I realized the politicians weren’t aware of what the process is like and what medical grads go through as far as application, exams and CaRMS.” – Dr. Sharjil Hussain, CMA Advocacy Caucus member

The response he received at those meetings helped Dr. Hussain realize that his insights as a clinical research physician could influence public policy. So, when the Canadian Medical Association (CMA) launched a program last month for physicians and medical learners interested in grassroots advocacy, he jumped at the opportunity.

The aim of the CMA Advocacy Caucus is to call for health care change during the federal election and beyond, whether by joining a letter-writing campaign or meeting with elected officials. Members are provided “calls to action” on a variety of CMA advocacy and policy issues, such as climate change and health, virtual care and seniors care.

With the support of the CMA Advocacy Caucus, Dr. Hussain has committed to connecting with his local candidates during the election campaign on another issue close to his heart: the shortage of family physicians and its impact on seniors care.

“I’m still very young to be involved with this,” he says, “but I see myself making a difference and being part of the positive change.”

Dr. Jill Alston also wants to make a difference. A clinical associate in geriatrics at St. Michael’s Hospital, she joined the CMA Advocacy Caucus to voice concerns about the outdated system of caring for seniors in Canada. She recently raised the issue with her local MP, Julie Dabrusin, and suggested the federal government could encourage provincial governments to change how they deliver care.

“I feel there’s a lot that can be improved upon in our health care system and it (CMA Advocacy Caucus) is a good opportunity to voice my opinion,” says Dr. Alston. “If I don’t do that, I have no right to complain about the status quo.

With the federal election just around the corner, the CMA is making it easier for all Canadians to put health back on the agenda.

Are you a physician or medical learner? Here’s how you can get involved in the federal election

Are you a patient or health advocate? Get involved by joining the CMA’s Health Advocates

In addition to the CMA Advocacy Caucus, the CMA has launched a public mobilization campaign called Health Advocates. A follow-up to the successful Demand a Plan campaign, which garnered 74,000 supporters, the Health Advocates program will help mobilize patients and the public to bring attention to the top health issues.