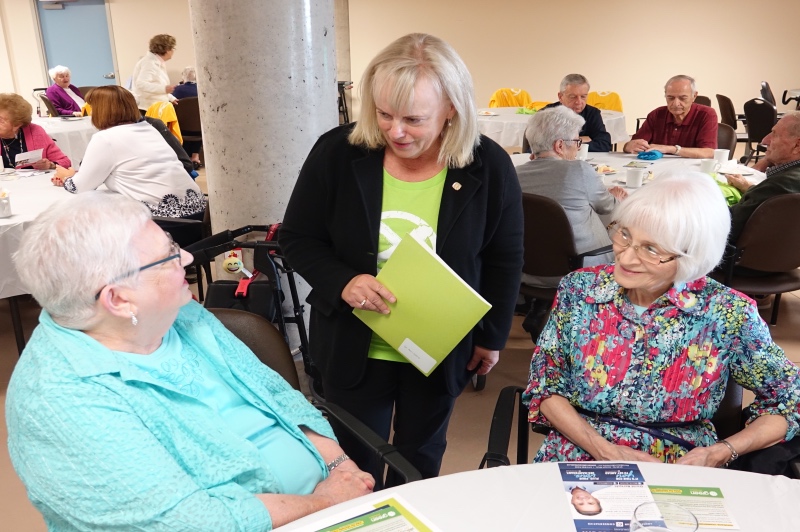 Arthur and Andrée Guarda listen intently as federal candidates make their pitch to a room full of seniors.

Free prescription drugs, cheaper long-term care costs and credits for caregivers are some of the pledges made by these Ottawa-area candidates. But for the married couple, both in their eighties, the biggest issue they face is timely access to specialists.

“I need a lot of neurological exams – waiting six months to me is like waiting three years to a young person – it’s a long time.”  -- Andrée Guarda, Senior

“It’s frustrating,” adds Arthur, “because you’d like to see whatever you’re suffering from eliminated.”

The Guardas were among dozens of seniors attending the election event at the Bruyère Village seniors community. Hosted by the Canadian Medical Association (CMA), the event helped highlight the need for more federal funding for seniors care – one of six health issues the CMA is focusing on this election.

Join us in putting health back on the federal agenda

CMA President-Elect Dr. Ann Collins was there to press the candidates on the actions the next government could take to support seniors care, such as topping up the Canada Health Transfer to provinces and territories based on population aging.

She also recommended a Seniors Care Benefit that would help seniors and their caregivers with increasing out-of-pocket health costs.

“Our current system wasn’t designed to provide the care that our seniors of today and tomorrow require and are going to require,” says Dr. Collins. “We’re calling on our elected officials to make that a priority.”

Dr. Collins points to many of her own patients in New Brunswick – a region with one of the highest senior populations in Canada. Many can no longer stay in their homes for health reasons but have to wait for a spot to open up in a long-term care home.

“I currently have five of my patients in hospital. Three of them are waiting for long-term care, and one has been in hospital since February.” – Dr. Ann Collins, CMA president-elect

The candidate event at Bruyère was the first of several CMA election events spotlighting seniors care.

On Sept. 27, Dr. Collins met with federal candidates in Moncton to discuss their actions and brought the CMA’s election agenda to Liberal candidate and Health Minister Ginette Petitpas Taylor, during a meeting in her riding of Moncton—Riverview—Dieppe.

“The lack of funding for seniors care is a day-to-day issue that impacts not only the lives of those requiring the care, but those giving it,” says Dr. Collins.

The CMA’s focus on seniors care continues in October, when Dr. Collins takes part in a panel discussion in Toronto, hosted by the Ontario Chamber of Commerce, on Ontario’s aging population.