Quebec resident Dr. Mathieu Nadeau-Vallée on TikTok as a public health tool (and how ‘Trudeau’ ended up in his username) 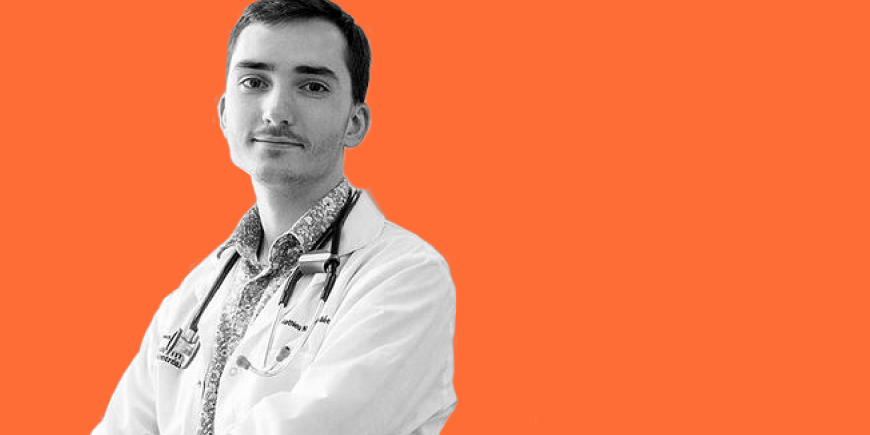 With more than 1.2 million likes on his TikTok videos and 75,000 fans, Dr. Nadeau-Vallée has become one of Quebec’s top health care influencers on social media. A Doctor of Medicine and Pharmacology and an anesthesiology resident at Université de Montréal, Dr. Nadeau-Vallée uses the platform to combat misinformation and encourage people to get vaccinated.

Why use TikTok for scientific outreach?

I started doing it when I realized that misinformation about vaccines kills. I figured that TikTok would be a relatively easy medium with the potential for great impact. This was my chance to have a positive influence.

Many of your videos focus on COVID-19 vaccines. Has anyone reached out to tell you they changed their mind about getting a shot after watching you?

Yes! At least 1,000 people got vaccinated after watching my videos. I count every single testimonial I receive; I’m so proud! There could be even more people who changed their mind but didn’t let me know — but that’s a lot either way.

How does misinformation affect people’s health in general?

Misinformation in any shape or form can cause a lot of damage. If you firmly believe in something that puts your health at risk, your physician will be concerned – for instance, if a patient who regularly takes aspirin suddenly stops because someone online told them to, they could die.

Has your background in pharmacology influenced your social media posts?

My PhD in pharmacology focused on challenging, contextualizing and analyzing scientific literature. I think that during the pandemic that’s helped me on TikTok because COVID-19 is about medicine, but it’s also about science.

What’s the story behind your TikTok username, ‘WalTrudeau’?

I was once told that I looked like a “bargain bin” Justin Trudeau. I was initially posting humoristic content on TikTok, so I signed up with the username “Wal-Mart Justin Trudeau.” But when I shifted to scientific outreach, I couldn’t really use Justin Trudeau’s name anymore, so I changed my username to “WalTrudeau.”

People on social media can be hostile towards health care workers. Have you found yourself on the receiving end at any time? Have there been any responses that made you question your work online?

Oh my God, yes, many! The most popular accusation is that I’m on Pfizer’s payroll. People actually created fake accounts with my name where “I” admit that I received money from pharmaceutical companies. I was also accused of taking money for killing people, and I’ve seen my face on posters portraying me as a Nazi.

I’ve also received more explicit threats, such as bullies saying that they’ll punch me or worse if they see me in real life. I’ve had to report these to the police.

So do you think that health is becoming politicized?

Yes, that’s what I’m seeing and that irks me. Science should always be and remain apolitical. Politicized science fosters skepticism and ends up having serious consequences for people’s health.

Do you plan on continuing your scientific outreach when the pandemic is over?

No, not as much. I think I’ve done all I can to convince people to get vaccinated. The hard core of society was reached. At this point, I think that most of the people who stubbornly refuse to get vaccinated are basically anti-science. For now, I focus mainly on encouraging people to go get their booster shot, because we know it is effective and saves lives.

What’s next for you after your residency?

I’ve just been admitted to a master’s in epidemiology, and I will be pursuing a clinician scientist program. Once my residency in anesthesiology is finished, I would like my work to be 40% research and 60% anesthesia in the hospital.

Obviously, as an anesthetist, I won’t be able to chat with patients much. But the few minutes we do talk to them are very important. Undergoing general anesthesia is rather stressful.

What do you think physicians’ role will be over the next 20 years?

I believe some medical principles should be included in the curriculum in elementary and high school. Public awareness and scientific outreach (or the democratization of science) need to be put at the forefront at a younger age. It’s 2022: there shouldn’t be so many people in our society who don’t understand how vaccines work. Health care workers have an important role to play when it comes to health promotion.

This interview has been edited and condensed for clarity.