Advocating for a drug shortage strategy 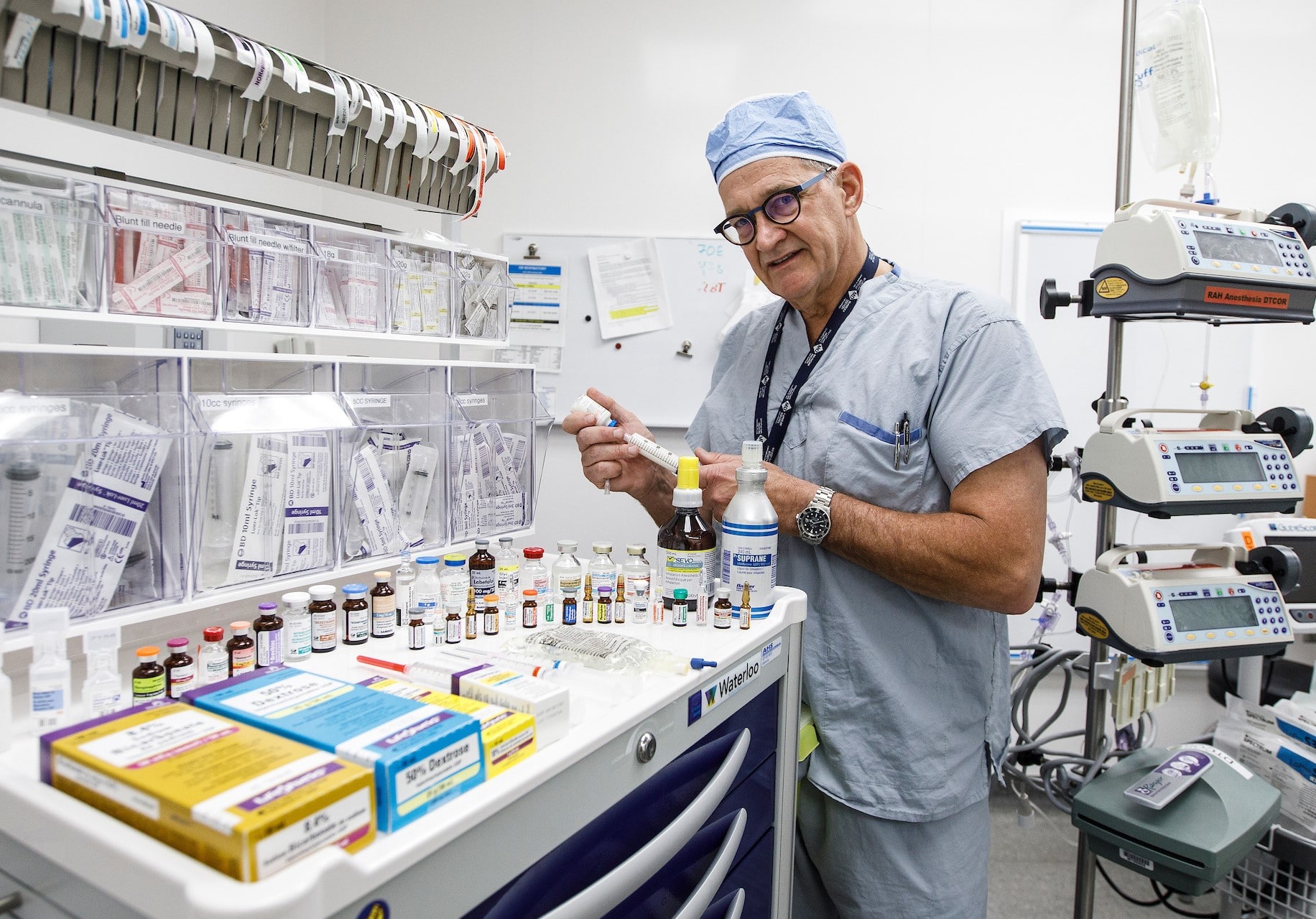 “In our profession the question is, what degree of shortage of which medications will make it necessary to cancel surgery?”

It’s a rare and life-threatening reaction to anesthesia that causes a rapid heart rate, a dangerously high fever and severe muscle spasms. The condition is called malignant hyperthermia, and dantrolene is the only drug that can treat it. In Canada, there is just one manufacturer. So when Alberta Health Services (AHS) issued a warning in May 2018 that dantrolene was on back order until late August 2018, the issue of drug shortages hit home for Dr. Douglas DuVal.

As an anesthesiologist at the Royal Alexandra Hospital in Edmonton, Dr. DuVal says the shortage forced him to ask some serious questions.

“If this antidote is not available, can you really schedule any elective surgery? Even though this is a rare complication that is unlikely to occur, is it safe to go ahead without an option to treat it?”

In the end, Dr. DuVal’s questions remained theoretical. Alberta Health Services managed to ensure its hospitals had sufficient stock of dantrolene on hand throughout the shortage, and no patient who needed the medication went without. This was possible because the shortage was brief and limited geographically. But Dr. DuVal says the potential for more widespread and prolonged disruptions in the supply chain is what concerns him.

So for the past two years, he’s been dedicating time to minimizing drug shortages, using his role as outgoing president of the Canadian Anesthesiologists’ Society (CAS) to push the issue into the political spotlight.

“Even when alternative medications are available, changes in practice can lead to significant medication errors which present a hazard to patients.”

“If we have a situation where we see nationwide shortages of a very important drug that has no real substitute, will the federal government have the capacity to authorize widespread importation of another formulation?” asks Dr. DuVal.

He points to an example in early 2018: a Canada-wide shortage of preferred medications used in regional anesthesia and obstetrics: ropivacaine (used for many kinds of nerve blocks including epidural anesthesia for labor and childbirth) and bupivacaine (particularly that formulation used in spinal anesthesia for Cesarean sections). Dr. DuVal says the disruption forced anesthesiologists to use different preparations of the nerve blocks, and at the time he warned it could become a “significant safety issue.”

“This is one of the problems that occurs when your favourite go-to drug is not available,” he says. “So somebody says, ‘Well I didn’t have this particular medication, I had to use this and I ended up using the wrong dosage.’”

In March 2018, Dr. DuVal wrote the federal minister of health to ask that she use her authority under Health Canada’s Special Access Program (SAP) to approve the importation of the two anesthetics from other countries and approve them to be licensed for marketing in Canada.

Health Canada advised him the SAP is only used on a case-by-case basis to assist doctors to access non-marketed drugs for patients with serious conditions and is “not intended as a default mechanism to address shortages or discontinuations.”

“It’s disappointing that the federal government still doesn’t see it as a situation where they could put some strategy together to look at how to have a massive response where such a shortage seemed to be particularly significant and prolonged,” says Dr. DuVal.

On the positive side, Dr. DuVal says early warning systems, like Health Canada’s new mandatory reporting website drugshortagescanada.ca,  are a step forward. They may not prevent supply disruptions, but Dr. DuVal says the early heads-up gives anesthesiologists time to develop strategies for sharing or rationing medications.

He even helped the CAS launch its own reporting system before stepping down as president. Though it is meant to track anesthetic incidents, Dr. DuVal is encouraging members to use it to report any instances where drug shortages have adversely affected their work.

“It adds some detail to the impact that these things can have and could serve as an early warning system, so if one province is experiencing shortages then it’s something we could inquire about and see what is happening in other places,” he says.