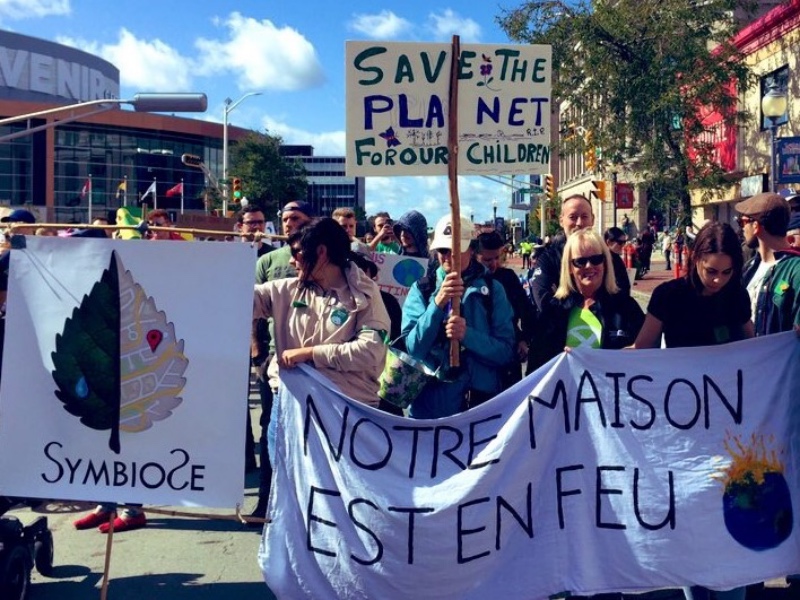 Decked out in sneakers, with a sign that reads: “Save the planet for our children,” Dr. Renée Turcotte joined nearly 2,000 marchers through the streets of Moncton. Alongside her in the Sept. 27 global climate strike were employees, professors, students and residents from the medicine program at the Université de Moncton. As a group, they gathered on the steps of city hall and asked local councillors how they planned to fight climate change.

“It’s a mandatory issue, it’s an emergency. We won’t stop until the government takes it seriously and has put measures in place to diminish the carbon footprint.” – Dr. Renée Turcotte, Moncton family physician

CMA President-Elect Dr. Ann Collins joined Dr. Turcotte in speaking to the crowd, calling on federal political parties to commit to concrete actions on climate change. She outlined the need for investments in health care and public health systems to better deal with the impacts of climate change, and also called for a comprehensive plan to allow Canada to meet its international climate change targets. She encouraged marchers to take action using the CMA’s online letter-writing tool, to email federal candidates about the issue.

How you can get involved

Are you a physician?      Help put health on the agenda this election

Are you a patient or health advocate?      Join the CMA’s Health Advocates

Dr. Turcotte says over the past few years, she has seen the health impacts of climate change in New Brunswick. Studies show more people suffering from asthma and allergies due to air pollution, more cases of anxiety and post-traumatic stress disorder from frequent flooding and a higher incidence of Lyme disease. But it wasn’t until she retired from family practice last summer that she felt she could devote more time to the cause.

“As a physician I felt it was my role to sensitize people to climate change and its effects on our health and to push the government to act,” says Dr. Turcotte.

In April, she and other community members created Symbiose+, a non-partisan committee in Moncton looking to improve the environmental footprint of society through petitions and climate strike marches. The group is associated with Symbiose, a student-led environmental association at the Université de Moncton, where Dr. Turcotte was a professor in the family medicine teaching unit.

“Our march today is aimed at all political parties,” she says. “Climate change should be an election issue and I support the CMA on that.”