What the new anti-harassment law means for doctors

Two years into the COVID-19 pandemic, physicians and other health care workers are burned out, exhausted and demoralized — not least because of escalating harassment.

Last year, protesters across Canada gathered outside hospitals to decry public health measures such as proof-of-vaccination mandates. And tactics targeting physicians — both in person and online — have included misogynistic and racist bullying, stalking, even death threats.

Dr. Don Klassen, a family physician in rural Manitoba, says it’s the worst treatment of health care workers he’s seen in 40 years of practice. “[It’s] the first time I’ve had it suggested to me that somebody would put a gun to my head,” he told the Winnipeg Free Press.

In November, the CMA called for urgent federal legislation to protect workers from such bullying and harassment.

“What we need right now is not the ignorance and hate of a small minority, but the kindness, patience and goodwill that most Canadians continue to demonstrate.”
— Dr. Katharine Smart, CMA president

How common is it for physicians to experience harassment?

The preliminary results from the CMA’s 2021 National Physician Health Survey found that more than 75% of physicians — you read that right — have experienced intimidation, bullying or harassment in the workplace.

More than one-third of physicians reported experiencing these issues at least a few times a month, with the harassment being more pronounced for women.

And abuse follows doctors beyond the physical workplace. According to a recent survey published by JAMA Internal Medicine, nearly one-quarter of respondents reported being personally attacked on social media in 2019. Here, too, a disproportionate number of women reported being targets of harassment.

For all targets, the impact was significant: those who experienced consistent harassment reported emotional distress and fear. 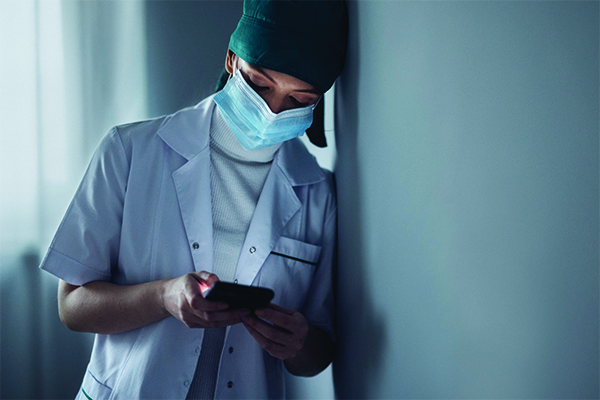 Physicians are protected by the same legislation as everyone else, meaning they can report harassment, intimidation and threats to the police. But some doctors say a bigger shield is needed. As Toronto physician Dr. Naheed Dosani told CBC News:

“When our governments make policy choices that don’t stand with the science and health workers, they leave us vulnerable with no cover, with targets on our backs. It’s like the Wild, Wild West out here — we are on our own.”

What was the CMA’s case for Bill C-3?

Violence and abuse against health care workers didn’t start with the pandemic. In 2015, the CMA General Council passed a resolution calling on the federal government to make it “a specific criminal offence to assault health care providers performing their duties.”

But the recent escalation of threats levelled against health care workers, the same people who are caring for the public in the midst of the crisis, has underscored the need for immediate action.

“The very individuals who have endured difficult personal sacrifices to deliver care for Canadians, in some cases risking their lives for patients, are now enduring threats online and in health care settings as they seek to continue to care for patients and advocate for public health measures. I have personally received such threats.

Every health care worker has a right to a safe and healthy work environment; yet, too many of my colleagues have been threatened and now fear for their safety.”

How will Bill C-3 make a difference for physicians?

Those convicted of these offences could face up to 10 years in prison. The legislation also states that offences targeting health workers can be used as aggravating factors during sentencing.

This law was passed unanimously in the House of Commons, and it comes into force today. pic.twitter.com/A53E52p2ho

What else can be done to protect health care workers from harassment?

There has been a wave of support for targets of aggression on social media. When the owner of a right-wing media outlet offered a “$5,000 bounty” for any video footage of Dr. Dosani breaking COVID-19 protocols, Twitter exploded with #IStandWithDrDosani posts.

A bounty has been issued on @NaheedD because he dared to advocate for public safety amidst a pandemic. Do we all agree that intimidation and hate towards healthworkers is unacceptable? Show support and get #IStandWithDrDosani trending.

This is despicable, targeted and violent.

I hope that my fellow physicians, politicians of all stripes and anyone who cares about goodness and human decency condemns this in the strongest possible way. pic.twitter.com/Q43ooiftCU

Too often, though, what’s missing is equally strong support from social media platforms themselves. Although some aggressive posts have been removed, there are calls for expanded action from companies like Twitter to protect the health advocates and experts providing vital expertise — for free — to their users.

If you are a physician who needs support, the CMA has resources to help through the Physician Wellness Hub. The 24/7 Wellness Support Line is also available for physicians, medical learners and their immediate families.